You’re doing it all wrong! 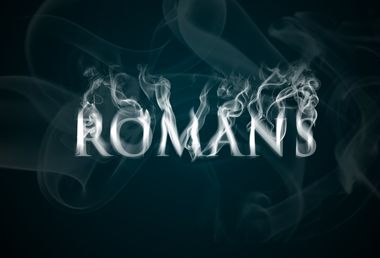 Everyone’s had one of those moments where the teacher’s walked in, exam papers in hand, and you know you did really badly.  It’s awful to wait for that paper with a big ‘F – see me’ scrawled in red across it.  However, there’s one thing far worse: getting a fail on a paper you were sure you aced.

Romans 1:18-2:5 is that failed exam for society.  It tells us that without Jesus, we’re really all failures before God.

WE FAILED THE TEST

1:18-19 sets the scene: God is justifiably angry with humans for our evil attitudes towards him and each other.  On top of that, we deny and suppress the truth about Him, even though God’s ‘invisible attributes’ (the great power with which he made the world, and his rule over it) are clearly shown to all of us.

Clearly Romans 1:19-20 is totally opposed to the idea that all things - from the precisely balanced and sustained laws of physics to complex and beautiful living organisms - came about 'blindly', without purpose. Creation, Paul says, points to a Creator.

Yet in spite of knowing that God is there, ruling over and sustaining the universe, we rejected him (1:21).  Humanity chose to become foolish, discarding God the Creator, claiming to be wise and worshipping parts of creation (1:22-23).  This is no different today – we still chase after the false ‘gods’ of the world – science, wealth, sex, popularity, body image, success, happiness, even ourselves.  We still turn good things into god-things.

God won’t let our treason go unpunished.  Yet the punishment is surprising.  God lets us live as if he isn’t there; our punishment is to live the life we’ve chosen for ourselves (1:26-32). However, the consequences of choosing to live without God are devastating.

For first-century Rome, this centred on sexual activity outside of a God-endorsed marriage (not much has changed in 2000 years). This God-less society led to all other kinds of evils committed against other people (1:29-32) – many evils we ourselves can put our own names next to.

In a move that would be funny if it weren’t so tragic, we show that we know what we’re doing is wrong by condemning others for practicing them (2:1-3).

Many presume, in both the 1st and 21st centuries, that we can rely on God to be ‘kind enough’ to us in our ‘small’ failings.  Yet we totally overlook how great our failing to honour God is.  We also overlook the fact that God’s kindness is not just for the sake of it – it is meant to lead us to change and to follow him (2:4), not the idols we choose for ourselves.

Therefore we show that we are fully responsible for the wrongs we commit against our Creator and fellow man; we show that we know what we’re doing is wrong, yet we do it anyway.

WHAT TO DO ABOUT IT

So, what can we learn from our failure?  Well, we know that all people in command of their senses, irrespective of their own situation, have the opportunity to know God as our Creator.  Yet we all reject him, fooling ourselves and bringing his anger upon us.  We serve the ‘gods’ we pick for ourselves, leading to all sorts of sins we commit against God and against other people.  We even show that we know what we’re doing is wrong, but we do it anyway.  Therefore, we all deserve death (1:32).

Remember what was written on the exam paper at the start: ‘F – see me’?  In the aftermath of an exam, the teacher (hopefully) goes through how to fix the problem.  Thank God – he does too.  Later on in Romans, we’ll see just how Jesus gives us the pass-mark we need.