How should you treat royalty? | Bible Daily Devotions for Teens, Christian Youth Articles

How should you treat royalty? 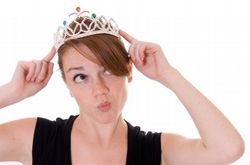 Why Prime Ministers get it wrong, but a prostitute gets it right

What do Paul Keating, John Howard and the Prostitute from Luke 7:36-50 have in common? They all dealt with Royalty in a way that wasn’t considered acceptable by the public. Former Prime Minister Paul Keating touched the Queen (on two occasions!) in a way considered unacceptable. Former Prime Minister John Howard did likewise in greeting the Queen. The Prostitute in Luke 7 likewise touched the King of the Universe in a way that onlookers considered unacceptable.

What did Jesus have to say about this? He considered that this sinful woman’s response was more appropriate than the Pharisee hosting the party. Simon hadn’t recognised just how great his debt was to Jesus.

Do you recognise you are lost? Has Jesus found you?

How do you treat "sinful" people (really really bad people) when they come to your youth group or church?