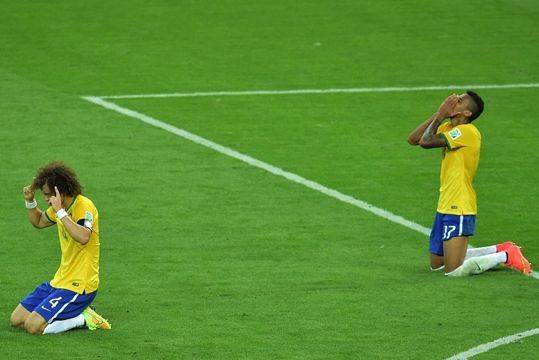 After a big loss, Brazil's captain prayed. Would you do the same?

How could Brazil lose 7-1 to Germany in the Semi Final of the FIFA World Cup? The heartbroken Brazilian fans were devastated; we could sense a nation in mourning. It might just seem like a game, but to 200 million Brazilians football is a way of life; a religion. The pressure to succeed for the Brazil national team is immense and expectations were for a victory on home turf.

At the end of the Semi Final it was interesting to see the stand-in Captain, David Luiz, kneel and pray. Prayer in sport is often seen after great goals or victories such as when the Brazil team famously knelt in prayer after winning the World Cup in 2002. Some have harshly criticised such public displays of faith. But this time Luiz, a committed Christian, was still praying. What for? He had played poorly according to commentators in his role as a central defender. Maybe he was thanking God for the experience of the World Cup. Perhaps asking how to handle the unfulfilled expectations of himself, his team and his country? Perhaps seeking to bring glory to Jesus in the midst of such a crushing experience?

Luiz is a vocal and widely respected Christian who recently transferred from Chelsea to Paris Saint-Germain. His faith gives him a perspective which will offer a demonstration of public testimony the world has not always seen, reflecting the verse: “I have learned to be content whatever the circumstances” (Philippians 4:11) and “Give thanks in all circumstances; for this is God’s will for you in Christ Jesus” (1 Thessalonians 5:18).

How do you cope with pressure?

The struggle under pressure to be content and thank God in victory and defeat is a challenge for all athletes, and for all of us as we experience the good and the bad of life. A resource called The Prize – Under Pressure, produced by Athletes in Action, features 5 top class players who have experienced the pressure of performing at the World Cup and the highest levels of professional football. Their Christian faith gives them a unique experience. One of these is Brazil’s Kaka, 2007 World Player of the Year and who at only 20 years of age was a member of the winning 2002 team. He says:

I have been through great moments in my career, and I have gone through hard moments as well, both in my career and my personal life. In all those moments I could count on God. In my prayers, and in the Bible, the word of God, with friends that share the same Faith as I do. To know that regardless of the situation, if it’s good or bad, that there is a God that loves us, and that makes the whole difference to me.

Check out the website www.theprize.com to view the short video with the football highlights and stories of Kaka and other Christian players.

If you are someone who prays, keep in mind David Luiz, his team and the nation of Brazil. Pray that Luiz's example will cause many in the team and the country to turn to God and trust in him.