A Christian Teen’s Guide to What God Wants From Guys 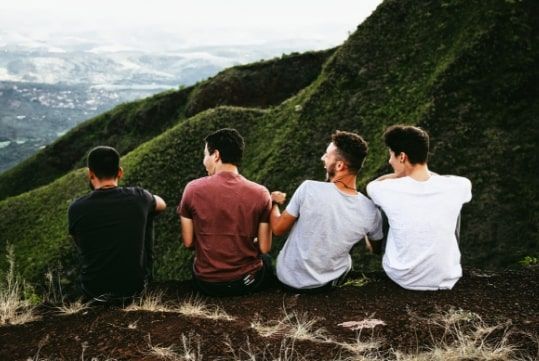 Young men: find out how God wants you to live

Hi there Christian guy! I bet you’re here because you love God and want to know what he wants from you.

That’s great! Even asking that question shows that you’re growing mature in your faith, and you understand that being a Christian means that your life is going to be affected by God’s will.

In this Christian Teen’s Guide, we’re going to take a look at what exactly God wants from you – firstly as a human, and secondly as a man.

What does the Bible say about what God wants from men?

In the beginning, God created the heavens and the earth – and he created people! Genesis 1:26-27 tells us:

Then God said, “Let us make mankind in our image, in our likeness, so that they may rule over the fish in the sea and the birds in the sky, over the livestock and all the wild animals, and over all the creatures that move along the ground.”

So God created mankind in his own image,

in the image of God he created them;

male and female he created them.

In Genesis 2, we get a more detailed account of creation. Now whether this story is literal or not is debated, but it is clear that God created distinct male and female people. The first man is Adam, and he is given a job: to work the land and take care of it.

Later, God creates the first woman, Eve. They are to work together in the land, and they are also brought together in a covenant relationship in which they are able to bear children to inhabit the earth.

After creating people, we unfortunately messed everything up. Since sin has entered the world God has one particular thing that he wants from all of us – male or female!

As Sean McDowell explains in this article, "God’s will is that, by believing in His son, Jesus Christ, people be saved. 1 Timothy 2:4 says that God, “desires all men to be saved and to come to the knowledge of the truth.”

If you are stumbling through life trying to know God’s will, but have never asked God to forgive your sins, then you are not even in the beginning of God’s will. Qualification number one for God’s will is your salvation. If you have never committed your life to being a disciple of Jesus, then God has no reason to reveal anything further to you regarding the pattern of your life.”

As Christians, God has more things that he wants from us – male or female.

Although we are utterly and completely redeemed from our sin purely by the grace of Jesus (and let’s never forget that!), as part of our new identity as followers of Jesus there are a few things we need to do. These are broad categories but there are many Bible verses to back them up. Take a look!

As a young Christian man, God has specific things that he wants from you. Many of these things are not that distinct from what he wants for women, but they are things that are specifically expressed to men as a special reminder in the Bible.

Interestingly, a lot of what the Bible has to say to men specifically is actually to men in certain circumstances – namely either pastoral ministry, or marriage. We’re going to leave those particular pieces of advice aside for now, since neither are likely to apply to teen guys!

So what is relevant right now? Well, God knows what temptations men tend to face as they seek to serve him, and he calls them out on it.

Men can have a tendency to…

Let’s apply some of the Biblical ideas above to how you as a young Christian man can seek to do what God wants. We’ll apply these ideas to an area of life that God says is most significant: relationships.

As pointed out above, God wants to have a relationship with you! What do you do to foster a relationship? You spend time together.

Make the effort to develop a daily Bible reading and prayer habit. Dig deep into God’s word and speak to him about what’s going on in your life. Ask him to help you grow more like Jesus. Ask him to help align what you want with what he wants.

Relating to other men

The Bible tells us that we need to love all people. But many young guys struggle to love their friends well. It can be all too easy to shy away from deep conversation and truly caring interactions, in favour of playing sport or video games together.

Don’t get me wrong, those things are great too! But they don’t lead to the same depth of relationship between guys that I think God wants for us.

Remember how Jesus interacted with other men? It wasn’t all kicking the ball around or trading sledges. Jesus formed deep relationships with his disciples and shared his life with them. Another example of male friendship in the Bible is between David and Jonathan.

While some guys may find it hard to develop deep friendships with other men, there is so much to be gained from opening up to others.

But what if you find yourself attracted to men and not women? That’s definitely a hard situation to be in, and developing deep friendships with other men will have another level of complexity. We urge you to seek advice and support from trusted adults like your youth leaders.

As mentioned above, relating to women is an area in which many Christian guys fail. They have a tendency to look at women’s bodies rather than their character, and they see women as objects rather than equals before God.

Remember what we looked at above: God created male and female in his image, equal inheritors of the earth and equally saved by Jesus. When you mistreat women, you are ignoring the fact that they too are children of God like you.

Honour the women in your life as sisters – sisters in Christ if they follow Jesus too. Show respect and care for them.

If you get married, there’s some more specific advice for men that you can explore as you figure out what it means to be a husband. But here’s a hint: it’s not about taking charge and being a big, strong leader! It’s all about love and sacrifice, once again.

As is pointed out in this excellent Fervr article, “If you've watched a few movies, you've probably noticed that a lot of them have a single male lead character.

Usually he's pretty tough, good-looking ... and knows how to treat the ladies.

If you're a young guy, the film-makers behind these movies desperately want you to think "I want to become like this lead character".

They're hoping that if you start thinking that, you'll become committed to the movie, and you'll watch every sequel that comes out.

Don't fall for it!

Jesus doesn't want you to be a tough guy. He wants you to admit your weakness and trust in his strength.

Jesus doesn't care if you're good looking. He wants you to look like your father in Heaven – loving, just, kind, gracious.

Jesus doesn't want you to use women for your own selfish purposes. He wants you to love women, to protect their honour, and to put their needs first.

Questions to think about

This article was co-written by Ryan and Elisabeth Carter.