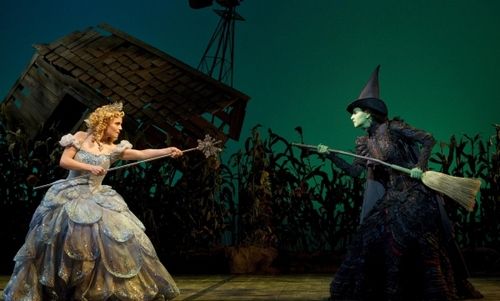 What makes someone wicked?

Is someone born wicked, or is wickedness thrust upon them? Is wickedness a result of your actions? Is it part of your nature? Or is it something you are called purely because you are different? The bad guy in The Wizard of Oz was the Wicked Witch of the West. Why was she called the Wicked Witch? Was she really wicked? Or is there something that we’re not being told? The hit stage musical Wicked takes us back to the beginning to show us that not everything is as it seems in the magical land of Oz.

The Wicked Witch of the West was an evil terror that plagued the land of Oz. When Dorothy was sent to kill the Witch, she was doing the right thing. Wasn’t she? What if there was an untold story? What if we got to know who the Witch was, why she did the things she did? What if what we know of the Witch was the product of misinformation and propaganda?

Elphaba is the girl who would be the Wicked Witch. Born with green skin and a rare talent for magic, she is a social outcast. Through her unlikely friendship with the popular witch Galinda and the tutelage sorceress Madame Morrible, Elphaba comes to the attention of the Wizard of Oz. But instead of an all-powerful wizard, she finds a charlatan engaging in war-on-terror style propaganda wars on innocent citizens of Oz.

The animals of Oz are facing persecution. They have been branded the enemy to bring unity to the rest of Oz.

Throughout world history, it has been a common tactic to paint a group of people as the enemy. And sadly, it has happened many times with Christians (or those saying that they’re Christians) as the perpetrators. During the reformation, denominations (e.g. Baptist, Anglican, Presbyterian, Catholic etc.) would demonise each other to show that they were right and the others were wrong. During the crusades, Muslims were painted as unholy monsters. When Constantine made Christianity the official religion of the Roman Empire, pagan worshipers became the objects of hate and persecution. Even in New Testament times we see groups forming that put others down to build themselves up. Man versus woman. Slave versus free. Rich versus poor. Jew versus Gentile. Circumcised versus uncircumcised.

It wasn’t on then and it isn’t on now. When Jesus died and rose again, it broke down all barriers. Everyone who calls on the name of Jesus is saved and is a son or daughter of God. Consequently, you are no longer foreigners and aliens, but fellow citizens with God’s people and members of God’s household (Ephesians 2:19). There is no excuse for how the animals in Wicked are treated. And there is no excuse for Christians to portray someone as the enemy just so we feel better about ourselves. There should be less time put into attacking people and more time put into showing them they have been welcomed into the same family we have been welcomed into.

Wicked is funny and engaging. The music and the singing are fantastic. The set design and props, combined with the special effects make this (I’m going to say it, please don’t hate me for saying it) magical. Elements of the set seem to enter and exit the stage without any assistance enhancing the “anything can happen” feel of the show. The same can be said of how the actors use trap doors and wire work. If you get the opportunity, you really should check this show out.

For more articles by Joel A Moroney, head on over to Pop Culture Christ.