We Bought a Zoo: Movie Review 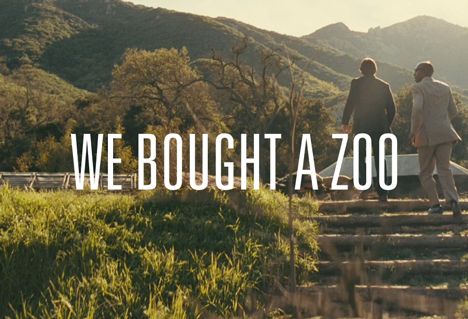 What happens when a grieving man buys a whole bunch of animals?

The recipe for a feel good film

Take a few animals, add Matt Damon, a grumpy teenage son, and an adorable seven-year old daughter. Pour in a dash of Scarlett Johansson and sprinkle with a soundtrack by musical master Jónsi and you’ve got the charming family film ‘We Bought a Zoo’.

This movie, based on a true story, centres on Benjamin Mee (Matt Damon), who buys a run-down private zoo after his wife dies. He moves there with his 14-year-old son, Dylan, and his 7-year-old daughter Rosie. Rosie is thrilled to be living in a zoo, but Dylan is not so excited.

Benjamin wants to open the zoo to the public, and is trying to get it ready for an inspection before it can open. At the same time, he is dealing with his difficult relationship with his son, is trying to cope with grief surrounding the death of his wife, and is starting to have feelings for Kelly (Scarlett Johansson), the head zookeeper.

The film fits rights into the ‘inspiring, feel-good’ genre, with its family values, gentle romance and people accomplishing the unexpected, but occasionally it becomes a little melodramatic. At times the acting felt overdone and forced, but it was generally redeemed with a charming performance by child actress Maggie Elizabeth Jones, who plays Rosie Mee. She has a gorgeous little smile and her relationship with her father was very touching to watch. High-quality cinematography, including beautiful shots of the animals and the landscape add to the appeal of this film. The standout feature was definitely the soundtrack, with complex melody lines, soaring string arrangements and tear-jerking crescendos.

All you need is love

In 'We bought a Zoo', Benjamin shows incredible love to the people he works with at the zoo, inspiring them to share his dream and treating them like family. Although the zoo and the animals are what are going to make him money, or make him successful, he puts the needs of others before himself, loving those around him as he does this. Even though his relationship with his son Dylan (Colin Lane) is, at times, difficult, he is still able to show love to his son.

In Matthew, Jesus tells a man who asks what the most important commandment is, that ‘You must love the Lord your God with all your heart, all your soul, and all your mind. This is the first and greatest commandment. A second is equally important: ‘Love your neighbour as yourself.’ (Matt. 27:37-39)

Christians are commanded to love God as well as to love others. God’s love is the most powerful love of all. In fact, in the Bible, it is often said that God IS love! By loving God with all our hearts, souls and minds, and recognising that God loves us so much that he sent Jesus to die for us, we will be showing other people how powerful God’s love is. This is one of the greatest sorts of love – showing others how God can save them too.

Overall, ‘We Bought a Zoo’ is charming and very watchable. It is marketed as a family movie, but does contain some language and complex plot lines, so it might be better for upper primary or high school aged kids. If you see this movie, tears may be shed (my little sister cried twice!), laughter will be heard and you’ll probably leave the cinema with a smile on your face… also, probably a longing to buy the remarkable soundtrack.