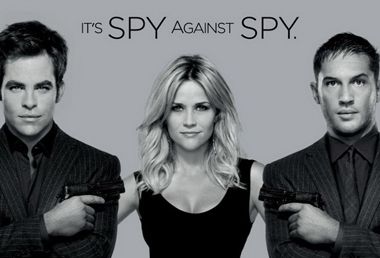 Should you watch romantic comedies that are all about sex?

Valentine’s Day always signals the release of a whole range of romantic comedies aimed at the young and in love. This Means War, starring Reese Witherspoon (that blonde girl from Legally Blonde), Chris Pine (that guy in Just My Luck and Star Trek) and Tom Hardy (that British guy from Inception), tells the tale of two secret agents, Tuck and FDR, who happen, through a series of fairly unbelievable coincidences, to fall in love with the same woman, Lauren Scott. There is sex and romance (aimed at the ladies, I suppose), with action thrown in so their dates won’t drop dead with boredom.

I should say that normally, I LOVE romantic comedies. I even quite like action! But I had my doubts from when I saw the trailer, and unfortunately for every couple who chooses This Means War as their Valentine’s Day flick, they’re in for a big long cliché served with a side of, well, cliché... and a splash of immorality.

This Means War seeks laughs with crude jokes and some (hardly ever hilarious) physical comedy. The characters are generally unlikeable and their actions made me cringe. Bugging a girl’s house so you can get to know more about her? Having the CIA follow her every movement? Not romantic, CREEPY! The script is weak and unmemorable and the plot takes a ridiculous turn at the end that seemed completely irrelevant to the “love” story.

Love and sex, Hollywood and Christianity

The characters in This Means War engage in behaviour that, to a Christian, is completely wrong and dishonest. Tuck and FDR, even after they know they are dating the same women, seem not to have an issue with the fact that she is cheating on both of them. Lauren herself decides to use sex as a way to decide between the two men. Lauren’s best friend advises her to choose the ‘hotter man’… need I go on?

Another issue with the film is the idea of love it portrays, centred entirely on sex and the physical side. As Christians, we believe that sex is for within marriage and a sacred gift from God, not something to be used in order to decide who is a more suitable partner. Almost all rom-coms contain an element of this and normally, my opinion on Christians watching movies like this is to still see the movie for the entertainment value, but then make Biblically-based judgements about whether the characters do the right or wrong thing and be open to discussing the issues with other wise Christians. However, this movie is marketed towards couples, with something that is designed to appeal to both guys and girls.

I believe this movie would be very unhelpful for any unmarried Christian couple to watch together as they are ‘fleeing sexual immorality’ (1 Cor 6:18) and seeking to serve one another, because of the sexual content and the ideas about commitment and relationships portrayed within it. I won’t go into too much detail as a) I don’t really want to think about it and b) you might still want to see the movie. I chose to take a female friend to the preview screening with me instead of asking my boyfriend, as I suspected after seeing the trailer that the movie would be unhelpful for a Christian relationship. The whole time I was in the cinema I was thinking ‘I am so glad I did not bring my boyfriend’. Apart from anything else, it would have been just plain embarrassing!

This Means War is not a great movie. Some people might find it hilariously funny or nail-bitingly thrilling, but I unfortunately did not and I don’t think I’ll be alone. I would recommend if you want to see this movie, to watch it not as part of a Valentine’s Day date (or any other date!) but with a friend of the same gender or with your family. Dorky, I know, but your boyfriend/girlfriend will thank you for honouring them and God by choosing a different movie.