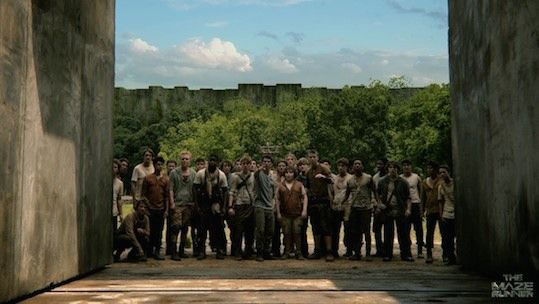 I’ve seen the future. There are a few dozen teenage boys and a giant concrete wall.

That’s the grim reality of The Maze Runner, the latest young adult novel to be snatched by Hollywood and churned into a new franchise for tweens and teens.

What's The Maze Runner all about?

The Maze Runner begins in a rising elevator. Lead teen Thomas (O’Brien) wakes up with no recollection of his past, and is “delivered” to The Glade, a place occupied by sharp-stick-carrying adolescent boys that sits next to a concrete maze. There’s much confusion at camp – the gents have very little understanding of why they are there, or the purpose of the labyrinth. A couple of the boys are “runners” who check out the maze by day but must exit before night because as we’re so plainly warned, nobody has ever survived a night in the maze.

Of course, until now.

Determined Thomas isn’t keen to sit around all day in the forest. He wants answers. He manages to twist the arms of the other boys to let him run the ever-shifting maze, fighting off Grievers (think a rejected Michael Bay idea for some weird spider-style Transformers) in the process.

The one thing that The Maze Runner has going for it is the mystery. I hadn’t read the novel so I really had no idea what to expect behind the concrete walls. And even though clues are revealed slowly, don’t expect all the answers before a sequel. You have been warned.

Conceptually, it’s quite a different beast to other book adaptations however what it misses is a strong lead. O’Brien doesn’t have the acting chops of Shailene Woodley in Divergent or Jennifer Lawrence in The Hunger Games and so I often found myself not really caring for his plight. The action plods along at points and is really let down by forced, unimaginative dialogue that explains things that don’t need explaining.

The path to true freedom

The inhabitants of The Glade are vulnerable in their society. They rely on the elevator to bring them goods, they have no idea how to get out, and nobody can remember much beyond three years ago other than their name. But it’s clear there’s something greater out there. The maze is spoken of like a force, or a god, and is feared as such. The boys try and work out patterns, clues, in the hope that one day they might escape the monotony of life and truly be free. Freedom is the goal, but they don’t know how to obtain it.

Our God isn’t a nasty force that keeps secrets of freedom to himself, but actually delights in sharing his plan of salvation with us. He revealed himself and his plan in his Son Jesus who died to give us freedom from the punishment our rebellion against him deserves. We are no longer held captive by our sin, but we are set free. Colossians 1:22-23:

But now he has reconciled you by Christ’s physical body through death to present you holy in his sight, without blemish and free from accusation— if you continue in your faith, established and firm, and do not move from the hope held out in the gospel.

Our Bibles reveal to us so much about God’s plan of salvation. When we trust in Jesus, we aren’t trapped in a maze or stuck in a rut, distant from God anymore. We are made right again, freed from our sin, and freed from accusation.

To be free we need to trust in Christ and in him alone. I think it’s incredible that our loving God delights in revealing this wonderful news to us.

This review was originally published at Reel Gospel.