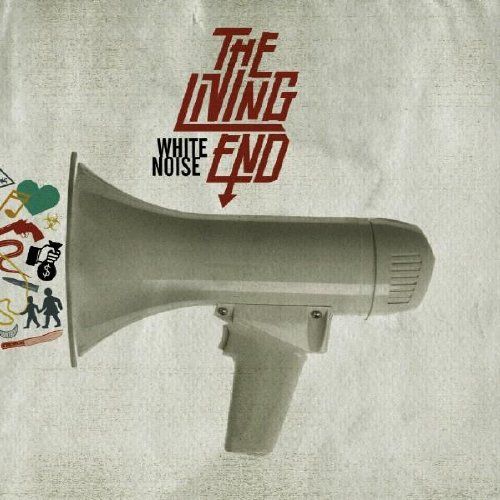 The Living End are fast becoming veterans of the Australian music scene having released their fifth album White Noise this year.

The three piece are best known for their punkabilly sound, and their hard-working, straight talking, songs full of sweat, blood and rock ‘n’ roll. They first came to fame a decade ago when they released their self titled album with instant hits like ‘Prisoner of Society’ and ‘Second Solution’.

Never a favourite for parents, ‘Prisoner of Society’s’ chorus became an anthem for the teenagers of the late 90s – this reviewer included. It goes:

“Cos I’m a brat
And I know everything
And I talk back
Cos I’m not listening
To anything you say.”

All the way along, the band’s songs have dealt with painful realities like tragedies and death, riots and fighting, war and hard work. Their main resolve, though, has always been to fight harder, drink more, and push on through the muck, and this sentiment returns on White Noise. The song ‘How Do We Know’ suggests today’s generation is rising up to conquer the broken world around them.

“Turn on the light
I need to decide
Because we may not survive tonight.
I’ll take my chance
Spare me the romance
We’ll give it that all we can.”

I can’t recall the band attacking God explicitly in the past (though I may be wrong) but this latest album puts an end to that. ‘Raise the Alarm’ is a song about front-man Chris Cheney’s personal philosophy, which is virtually the quintessential Australian attitude.

“I may not believe in Jesus
But I believe in sacrifice
Life doesn’t always stand to reason
No one ever gets a chance
To live it twice.”

The ideals of the ANZAC legend and the ‘fair go’ live large in the Australian psyche, in many cases having usurped the place of Jesus. Cheney makes it clear that this doesn’t make him a “lesser person” because, after all, religion doesn’t matter nearly as much as what’s inside someone’s heart. The song’s chorus bellows:

“The living that die,
The constant deny,
The chaos, the calm.
Raise the alarm.”

We oughtn’t be too quick to scoff at Cheney here. While we will disagree with his attitude to Jesus, surely in many ways he’s got it right. The book of James in the Bible makes it clear pure religion is about what is in one’s heart and what one is prepared to do. Undefiled religion is shown by what one will do for orphans and widows, and keeping yourself from being polluted by the world. In the book of Joel as well, God calls sinful Israel to rend their hearts and not their garments to show their repentance.

More than anything else this album raises the question of the relevance of Christianity today. Of course Jesus is eternally relevant, but it is up to Christians to demonstrate that by the kind of lives we live and the things we say – and not with sacred jargon and traditional rituals.

I think what Cheney and many Australians are looking for is ‘pure religion’ which is visible and tactile.