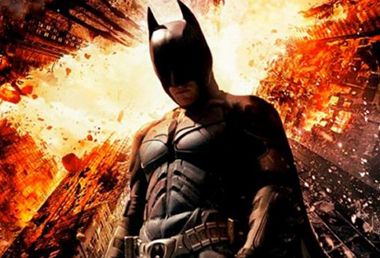 It may not look like it, but Batman can teach us a lot about love.

The truth about Batman

I’ve always struggled with highly anticipated films, because the more attention they draw, the more likely they are to be spoiled before you finally reach the comfort of your cinema seat. I often enter a self-imposed media ban in order to protect myself, but was that ever going to be enough with the most anticipated film of the year? On my way into The Dark Knight Rises, I passed a person coming out of a session that had just finished – and he had the biggest grin spread across his face. It didn’t give away much, but it did show his appreciation for what he’d seen and heard. Maybe that’s the best goal for this review, if you’re as shy of spoilers as I am…

When The Dark Knight faded to black in 2008, Bruce Wayne had decided to allow his super alter ego to take the blame for several murderous crimes, and in particular the death of the district attorney Harvey Dent. Of course, Dent was in reality the violently disturbed Two-Face, but Bruce had concluded that a city needed a different sort of hero than a masked vigilante if it was going to take responsibility for its own justice. However, peace cannot be built on a lie, and the curtain rises on a Gotham that is vulnerable to criminals again, because it doesn’t know its own history.

In fact, Bruce Wayne has not only embraced a lie for Gotham’s sake, he has built his life thereafter on a series of mistruths. It remains for Michael Cane, in the form of his conscience and confidant Alfred, to set him straight:

“What if we all stopped trying to outsmart the truth and let it have its day? … I know this means your hatred, but maybe that’s worth it to save your life.”

Telling someone the truth is one mark of a true friend, not simply because honesty is the foundation of all lasting relationships, but in doing so we take the risk that they will rather reject us than listen to reason. The same could be said for a Christian every time they challenge the mistaken worldview, as much as it can for Alfred. But in The Dark Knight Rises, we see a hero rise to the challenge of personal pain as much as the suffering of a city.

What motivates a superhero?

Viewers should prepare themselves for not one but two major surprises that will test the carbon-fibre of the caped crusader. No doubt many people will mistake his response for courage, simply because we’ve lost the meaning of the word that really describes his actions: love. It’s not that Batman is overcome with warm, fuzzy feelings every time he flies his bat-copter down a Gotham street (look out for that one!). It’s his dogged determination to put someone else’s welfare ahead of his own. Gary Oldman’s Commissioner Gordon tells newcomer Detective John Blake (Joseph Gordon-Levitt) that he hopes he comes to understand this level of sacrifice:

“One day I hope you have a friend who will plunge his hands into the filth so that you can keep yours clean.”

Does Blake learn to better understand Gotham’s saviour? Will Batman finally lay down his life for its citizens? These are questions that can be easily answered for the price of an admission ticket. But I hope you also pick up an appreciation for the deeper messages behind what you see and hear.

The Dark Knight Rises contains enough action sequences, gadgets and insider references to ensure that almost three hours of film won’t disappoint, and when you emerge again into the cold light of day you can dwell on the fact that the world has already seen Batman’s level of love in action. Jesus took on an adversary more hellish than Bane when he delivered us from death. His love didn’t look for a way out, but trusted his Heavenly Father would preserve him. However recognizing this real life hero is still no easy task for us citizens of Gotham. It hangs on us answering a question similar to the one Alfred posed to Bruce. Will we take refuge in a comfortable fantasy, or embrace the harder truth that we need a way out?