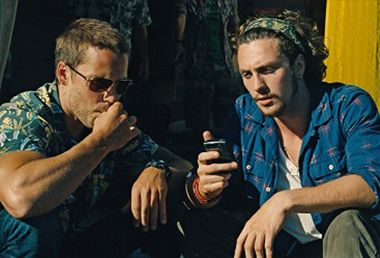 Drug culture can often look cool, but it always leaves a trail of broken lives.

This movie actually evolves into a beautiful love story containing some impressive heroism, but seems at the same time to romanticise crime and hedonism (the pursuit of pleasure above all else). There is excessive swearing, simulated sex scenes and low-level gore but the whole Kill Bill style of the movie means you aren't meant to take it all too seriously - perhaps lending it the mature rating, instead of an R rating.

In some scenes, however, certain facets of relationships between the characters show very believable raw emotion. Benicio Del Toro is definitely the stand-out actor for me in this movie – but there is a real tug of war happening – his character is always scheming and slithering in and out of the grass, yet demands a certain level of respect when needed.

The entire movie is anchored in the world of drugs and the undergound society it helps support and is linked to. Cartels, guns, gang culture and revenge all feature strongly in the movie. Interestingly, the resulting pain, the hurt, the betrayals and the death of people involved is also showcased – ultimately showing that crime, at the end of the day, will always lead to suffering.

So, on the one hand, I can see how the movie will appeal to people who think the criminal world, and in particular, drug culture is 'cool'. On the other hand, whilst Savages at times appears to glorify drug culture, it doesn't shy away from also showing the negative results of being involved in this dangerous world.

As a result, the audience is whisked away into an alternate reality for all two hours of the film, before being stunned back into the ‘real’ world at the end of the movie. The shock will have you asking yourself “what just happened there?”.

To sum it up, Savages is a flurry of adrenaline, which takes you deep into a world without morals, and along the way can tend to glorify drug and gang culture. I find it hard to see how this movie would make a positive impact in the lives of most young Christians, so it's probably best is to sit this one out.