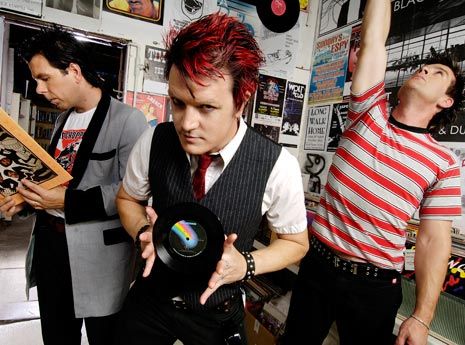 Do I need to believe in God or is it good enough to trust in myself?

Raise the Alarm is the third single of The Living End’s 2008 White Noise album.

In the name of the Father
The Son, and the Holy Ghost
I’m not concerned with religion
After all, it’s what’s inside that matters most

The Living End are taking the emphasis off God and putting on us. It doesn’t matter if there’s a God or not. What does matter is how I live. God probably doesn’t exist anyway. He’s a made up concept. We don’t need him to show us how to live. Because deep inside my heart, I know what is right and wrong. I know what it means to be loving and sacrificial. I don’t need a fictional God with his arbitrary rules to tell me how to live.

Which would be all fine and good. Except for one problem.

What if you’re wrong?

What if God does exist?

God is not a made up concept. He has revealed himself through both his son Jesus Christ.

Jesus is God himself. He preached, he healed, and most of all, he died and rose again. He did all these things so that we may know our creator and that we may have eternal life with him.

What kind of salvation does the song writer believe in? He must surely believe that we need to be saved from something. And he’s right. We need to be saved from our sin. But we can’t do it ourselves. Raise the Alarm implies that we can. That through our own efforts we can overcome our predicament and rise up strong and proud.

Our sin is so great that we would be forever stuck. But through Jesus, we can be saved. “Through Jesus we can be rescued. But because of his great love for us, God, who is rich in mercy, made us alive with Christ even when we were dead in transgressions-it is by grace you have been saved.” (Ephesians 2:4-5)

We can be assured that the one that does not fail or falter will look after us. Which is so much better than having to rely on someone who makes mistakes - like me.