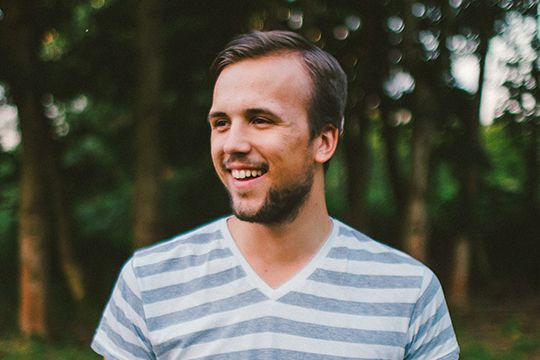 Fervr finds out more about this true story of standing up for Jesus.

Yesterday, we featured a short film about a young woman who stood up for her faith in Jesus. Based on actual events, 5 Words is set in the former Soviet Union in the year of 1958. In the film, the young woman who is interrogated only speaks "5 words". Fervr interviewed the film's director Dennis Mulyar, to find out why he thinks this story from 55 years ago should be seen by all of today's Christian teens.

Dennis, What motivated you to produce 5 Words?

As a child, each time I visited my grandmother’s house, I never missed a chance to hear personal accounts about her life and how she fought for her faith during the Soviet persecution in the 1950’s. The stories she told me played like films in my mind. A single snippet from one story stood out to me in particular. I’ve always wanted to do something with it, perhaps transform it into something tangible rather than leaving it a vision that lived in my mind, and finally the day came when I had the perfect opportunity to do just that for a school project. Understanding that this was a film of my culture was something that has caused me to attach a great amount of significance toward it. This wasn’t just some story about someone far away and long ago, but it was something much more personal and close to my heart. I realized that if it wasn’t for the faith and boldness of our courageous grandparents and ancestors, I wouldn’t be here today in America. I am a first generation Ukrainian-American, and all I can say is that I am very much blessed.

Why do you think this story is important for teens today?

I believe this story is important, particularly for the young generation today because it will allow them to become aware of what believers had to do for their faith in the past; the fight and the struggle they had in order to get through the torment and proceed to where they are today. I feel that today, multitudes of young teens live in ignorance towards the outer world and the history of the past. Being the visual generation that we are, this film is effective in not only recounting, but also in portraying what really had taken place. The acting, locations and props are spot on with the time frame of this historical event. Another goal I have is to inspire young people to record their grandparent’s narratives and be intrigued in what their family has went through, because as our grandparents pass on, their stories will fade with them, to never be retrieved again.

Is this kind of persecution still common amongst Christians today?

The persecution of Christians is very common in middle-eastern countries like Syria, Iran, Iraq, and Saudi Arabia. Hearing of the inhumane injustices towards Christians in many countries today is enough to send chills down my spine. The crimes committed towards followers of Christ in those parts of the world aren’t much different from what was done during the Soviet times. As far as America, I believe that persecution exists, however it has taken on a different form. Today teachers put forth effort to stop students from writing, or even mentioning anything, about God. There are even schools that don’t allow Bibles and prayer. I believe oppressive times lay ahead for those Christians abiding in America. There have already been laws passed, and and even more await, that go against everything we believe. It will be a test of our faith that will challenge us and drive us to think about our foundation and who we really are in Christ.

What do you hope this short film will achieve?

We live in a culture that strives to define us, and I believe it is time for us as Christians to take a stand. This film showcases a young woman who stands strong as a rock in her faith, no matter the cruel circumstances. Some of her fellow friends had given in, but she stood unrelenting for what she believed in, because her faith was rooted deeply in Christ. Many young people will at some point face the following inevitable question: “Will you follow the crowd, or will you go against the current and stand for what is right?”

Are you planning a follow up short film to 5 Words?

This was a truly enjoyable, but extremely challenging project! The creation of this film, including finding the correct props, uniforms, time area, and location, was not so easy! Nonetheless, I am definitely considering making some sort of follow up to 5 Words in the future. Considering this, I’d like to add more storyline and make the film much longer while it still being a short film. Stay tuned, and follow me on Instagram and/or Twitter @Mulyard to see what I’m up to!