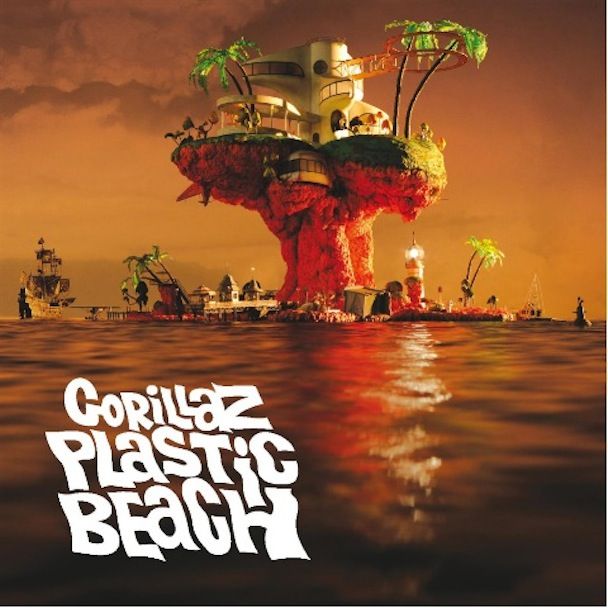 Does this cartoon band hold the secret to the meaning of life?

There have been some truly great cartoon musical acts over the years.

Josie and the Pussycats. The Groovy Ghoulies. Jem and the Holograms. MC Skat Kat. Dethklok. Animated musicians are nothing new. But my all time favourite cartoon act would have to be Gorillaz.

I love Gorillaz. Partly because of the artwork of Jamie Hewlett, who is responsible for Tank Girl, an incredibly insane and vibrant comic. Partly because of Damon Albarn who is pushing the boundaries of musical exploration and collaboration. And partly because Gorillaz are not just a music group, but a multimedia experience. These characters are made real through not only through the albums, but through the film clips, the concerts, the website, the games, the toys. Gorillaz are like nothing else out there.

Their latest album? Plastic Beach? I believe it’s their best effort yet.

On my first listen to the album, I wasn’t sure what to think. Nothing really stood out for me. But this is an album that rewards multiple listens. The sea shanty stylings of White Flag. The 70s funk of Stylo. The pop-like absurdity of Superfast Jellyfish. The 80s synth in On Melancholy Hill. Each song offers up something different and unique. They manage to be simultaneously familiar and cutting edge.

Initially, I struggled to identify any stand-out songs that would work as a single, but now I can picture (can you say picture when you’re talking about a listening experience? I can’t think of a better word) many of these songs being played on the radio. Shame that many radio stations would steer clear of these songs, just because they’re not over-produced pop dance songs that sound like everything else on the radio.

One of the things that really make Gorillaz stand out is their use of guest artists. Plastic Beach features an eclectic range of guests, including Snoop Dog, Mos Def, Bobby Womack, De La Soul, and Lou Reed. Where else would you find such a diverse mix of artists? Lou Reed alone is worth the price of admission for me. His album Transformer is one of my all time favourite albums. To have him perform on Plastic Beach is pure joy. And the guest stars don’t stop with the music. Check out Bruce Willis in the film clip for Stylo for example.

Throughout Plastic Beach there’s the idea of escapism. Come to Plastic Beach where everything will be fine. This is a place where you can relax and enjoy yourself. Just don’t bring anything with you that will wreck the vibe. Don’t bring your guns and violence and theft. And don’t bring your religion either (White Flag). Religion is one of the causes of problem in this world, according to Gorillaz. It causes arguments and conflict, therefore it has no place in the Plastic Beach utopia.

Yet Plastic Beach is not a utopia. There’s unhappiness. There’s longing. On the island of Plastic Beach is a place called Melancholy Hill, where people sit and long for what is missing in their lives. Gorillaz don’t really believe that finding meaning in pleasure and excess is the way to live in this world. They acknowledge that it is a lie. That it is a fantasy we create to hide from the truth of this world.

There is a hole in our lives. We try and plug it up with parties and friends and experiences and stuff. But the hole is still there. We need something more. We search for this ‘missing something’. We search for meaning and identity. What’s missing is a relationship. What’s missing is knowing our creator and knowing his will for our lives. Only when we recognise that through Jesus Christ we can be in a restored relationship with the creator, only then can we find true purpose and meaning.

Plastic Beach is a great album. If it doesn’t work for you the first time, give it a couple more attempts. It really is a rewarding musical experience.