Empire of the Sun 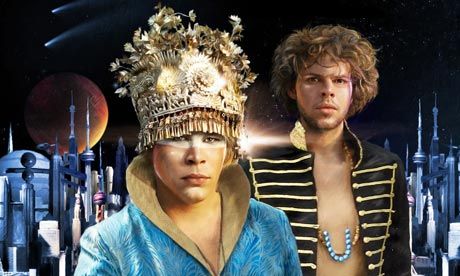 Walking on a dream

There are quite a few duos around in the music scene these days, and a lot of them are doing electronica/rock albums. To begin with, there were acts like MGMT and the Presets, and now there’s Empire of the Sun.

The band is Australian, and is made up of Luke Steele from ‘Sleepy Jackson’, and Nick Littlemore from ‘PNAU’. However, this is not your typical ‘Australian’ sounding album. It’s extremely well produced, has an international appeal, and has been a big hit in the UK and US.

It is difficult to really get a grasp on what these guys are singing about, but the whole vibe of the band seems to transport you to another time and place. The songs feel like a soundtrack to a fantasy movie, which is brought out even more by the whacky outfits and strange video clips. Empire of the Sun combine the music and visuals to create a fantasy land you can escape to every time you press play.

A lot of people think Christianity is a bit like this. Every time life gets tough, or when you’re scared, you can imagine God & heaven. They tell us it’s all a big fantasy, a fairy tale that someone made up.

We know the truth is different. Our faith is grounded in reality, and we have the accounts of those who saw Jesus to back us up. As Peter said, just before he died:

“We did not follow cleverly invented stories when we told you about the power and coming of our Lord Jesus Christ, but we were eyewitnesses of his majesty.”

So, put this album on, chill out and relax. But don’t let the fantasy distract you from God’s ultimate reality.