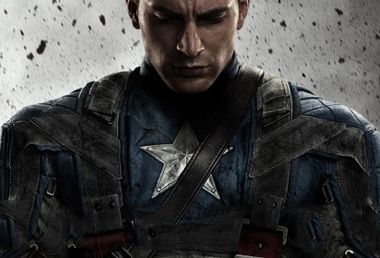 What happens when a weak man gets superhuman strength?

If you were checking out the racks of magazines and comic books in December 1940, you might have caught a glimpse of a brand new comic book called Captain America Comics. On the cover was an image of a man dressed in an American flag themed costume punching Hitler in the face. This was pretty forward thinking of the artist, considering the attack on Pearl Harbour and America’s entry into World War II was still a full year away. Here was the very image of American freedom and pride in action. Since then, Captain America has been front and centre amongst the many Marvel superheroes. So it was inevitable that Captain America would get his turn to shine as part of the Marvel Comics onslaught of the silver screen.

What's the movie about?

This is a superhero adventure movie set during WWII that also has to act as the next chapter in the ongoing Marvel movie continuity already set up by Thor, Iron Man, and The Incredible Hulk. A lot could have gone wrong. But it doesn’t. What we have here is a film that manages to be a tight, heart-felt adventure that is one of the most consistently good superhero movies ever made.

When we first meet Steve Rogers (played by Chris Evans), he’s a scrawny, sickly young man who desperately wants to enlist in the army and fight for his country. Steve doesn’t want to fight because of some kind of macho idealism or misplaced patriotism. He wants to fight because, as someone who has been bullied his entire life, he wants to what is right and oppose the Nazis – the bullies of Europe. Despite being continually rejected for the army, he perseveres. When the opportunity comes to be a trial subject in a super soldier experiment, he jumps at the opportunity. And frail Steve Rogers becomes super human Captain America. Just in time to take on Hydra, an off-shoot of the Nazis, led by the villainous Red Skull (Hugo Weaving).

Is it worth watching?

Everyone in this movie, from the leads to the supporting actors, puts in a great performance. And the setting doesn’t exactly hurt either. The World War II backdrop is almost a character onto itself. The whole film feels like it has been shot in sepia tones, making the film look and feel like a lost relic of a bygone age. And unlike more contemporary films, the setting allows for the good guys to be good guys and the bad guys to be bad guys. It’s almost a foreign idea in our modern times for heroes to act like heroes. That’s something I love about this movie.

The only problem I had with Captain America: The First Avenger is flagged in the title. This movie is part 5 of the Marvel movie saga. In order for all the pieces to be in place for next year's Avengers movie, certain decisions had to be made. Those decisions meant that if we get a second Captain America movie, it is unlikely to feature the same cast in the same setting, and that disappoints me. I would love to see a sequel in the same vein as this movie.

What can Christians get out of this movie?

At the core of Captain America is the story of a young man who was chosen for greatness. He wasn’t chosen because he was the biggest or the strongest or the most handsome. He was chosen because of what was in his heart. I’m reminded of King David in the Old Testament who God chose for similar reasons. David wasn’t the obvious choice to become king of Israel. When God sent Samuel to the family of Jesse to pick a king, Samuel was keen to select the eldest son, Eliab. But God said “Do not consider his appearance or his height, for I have rejected him. The Lord does not look at the things man looks at. Man looks at the outward appearance, but the Lord looks at the heart.” (1 Samuel 16:7) Instead, God chose the youngest son, David. Because God cares about heart, not appearances. Doctor Erskine, the man behind the super soldier project, has these words for Steve Rogers “A weak man knows the value of strength… and knows compassion.”

Captain America is a solid win. I’d even go so far to say that it is the best superhero movie of 2011.