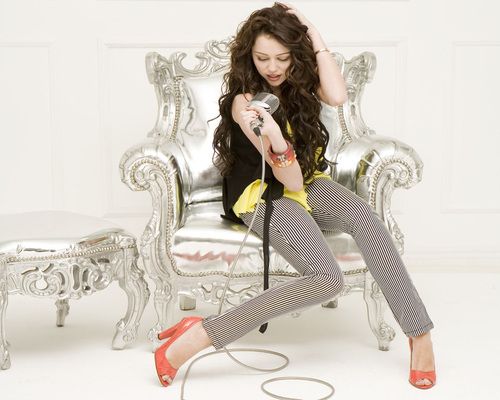 Miley Cyrus' new album shows she is not as grown up as she thinks she is.

With her strong voice and sometimes angsty teen lyrics, Cyrus is reminiscent of a younger, Disney-fied Avril Lavigne. This is not necessarily a bad thing, given that Lavigne appears to be making the transition from teen sensation to legitimate adult musician more successfully than some of her peers (read: Britney Spears).

Cyrus has covered Cyndi Lauper’s 80s classic ‘Girls Just Wanna Have Fun’. The lyrics, as the title states, are about having fun. “Some boys take a beautiful girl and hide her away from the rest of the world. I wanna be the one to walk in the sun.” At its heart, this song is about independence, about not losing yourself or your identity when you are in a relationship. Cyrus, along with the vast majority of her fans, is at an impressionable age, and it is good to hear this positive message being enforced.

However, this is where the album gets confusing. On the one hand we have Cyrus singing about independence and not being lost in relationships – all very mature themes – and on the other hand we have her singing about what she hates about people.

There is also much in the album that indicates that Cyrus is not as grown up as she thinks she is. Recent controversies such as the photo scandal paint Cyrus as a young girl struggling to grow up too quickly. The scandal – Cyrus posing naked and draped in a sheet for Vanity Fair magazine – and the issues surrounding it are echoed in this album.

In the song ‘7 Things I hate About You’, Cyrus spends the majority of the song listing what she doesn’t like about a boy. At the end of the song she turns around and lists the seven things that she does like. The song’s nasty lyrics are cleverly masked by its upbeat tempo. For someone who professes to be a Christian, Cyrus is doing a bad job of demonstrating this. Put simply, this is not a loving attitude to have, and one that is not encouraged in the Bible.

As far as quality of music and vocals goes, this is a surprisingly good album from a talented performer. The thematic conflicts within the album can be put down to youth, inexperience and the fact that we humans aren’t perfect. The real issue is whether Cyrus will mature in her worldview and her faith as her audience matures and whether her songwriting and her music will reflect this.