What is the best Bible translation for teens? | Bible Daily Devotions for Teens, Christian Youth Articles

What is the best Bible translation for teens? 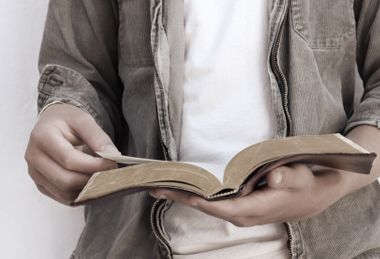 Finding the balance between accuracy and read-a-bility.

A question that many people in youth ministry often ask is, what is the best translation of the Bible for teenagers? If you're a youth minister, there can sometimes be a temptation to pick the translation that fits what you’re trying to say. Before I get too far into this article, let me say this. Whatever you do, resist this temptation! It's imperative that as teachers and leaders who disciple young people, we never use the Bible to try to fit what we are saying.. The Bible should never be used to support any idea, clever thought or wisdom we may think we have. Instead, as those under the authority of scripture, we in youth ministry should do all we can to use the Bible as the foundation for everything we teach, rather than as a tool to build our own arguments.

1. A translation with language that makes sense

Jesus called us to take the gospel to all nations. The day of pentecost, as recorded in Acts 2, shows that when the Holy Spirit came, believers were supernaturally able to speak in languages other than their own. God is so committed to the gospel spreading throughout the world that he helped his people learn completely foreign languages in a fraction of a second. Take that Rosetta Stone! Ensuring that the gospel can be heard in as many languages as possible is something that greatly matters to God. As such, it should also matter greatly to us.

But language is so much more than just, well … languages. The English spoken today, is worlds apart from the English spoken 500 years ago. French in Quebec is quite different than French in France. To make it even more complicated, the language and tone I am using in this article is vastly different than what it would be if you were reading this article on a piece of paper nailed to the front door of your local church in the 16th Century. As language develops, it changes to suit not just different geographical regions, but also to suit the main mediums (e.g. books, TV, internet) of the culture. If you think what I’m saying here is completely nonsense and I’ve made you LOL and ROFL, then I just proved my point.

Not all translations are equal

When choosing the best translation of the Bible for teens, it’s important we are using a translation written in language they can understand. Some translations with very easily understood language, such as The New Living Translation or The Message, are very popular among those who teach teenagers, but they aren’t without their critics. The Message, in my opinion, is perhaps most useful if thought of as a commentary - helpful for explaining certain parts of scripture, but I don’t use it for teaching or preaching. My concern with using translations that have made such an effort to be "easy to read", is they tend to gloss over some of the more difficult or complex parts of scripture.

There can be a danger of reacting just as unhelpfully the other way. Those who use only the King James Version (KJV) of the Bible may be guilty of this. In an effort to be so true to the original text, they can insist on an English translation that is difficult to follow by today's teens. It would be easy to pick on the KJV loyalists, but even if I disagree with their version of choice, I admire their determination to stick as close to the original manuscripts as possible.

So, as great as the KJV is, the English language has come a long way since the KJV came about in the early 17th Century. Not everyone is eager or able to understand the old English found in its pages, and the ‘thees’ and ‘thous’ are an immediate turnoff for many. Still, the loyalty the KJV shows to the original Hebrew and Greek in scripture is astounding. Even if we want a more contemporary translation, we must not use one at the cost of the message being changed.

I know many people like to use the New International Version. I think the NIV is a great translation, but it takes a few liberties that cause some issues. Personally, I think there are translations that are more faithful to the original manuscripts.

2. A translation true to the original

When choosing a translation of the Bible to use with teens, we need to be careful not to belittle scripture to a language so common and accessible that it completely misses the original intention of what was written (under God's revelation) by the authors. Scripture is God’s written word to us. There will always be words, phrases and concepts that are difficult to comprehend because we’re created beings, trying to understand what’s inspired by the creator God. We don’t do ourselves any favours by 'updating' scripture to the point that it misses what was originally said.

As discussed above, the KJV has an incredible legacy. Its translators poured over the original manuscripts to produce as loyal of a translation as possible. It’s language may be outdated today, but it is still a hugely important translation that has been used to advance the gospel in remarkable ways over the last 400 years.

My recommendation for the best Bible for teens

So, is there a translation that uses contemporary english, but shows the same loyalty to the original manuscripts today that the KJV used in the early 17th Century? Thankfully the answer is yes. The English Standard Version (ESV) does exactly this. It builds on the legacy of the KJV but trades the old-fashioned words and phrases for ones that are much more easily understood by readers today. Most importantly, it does this without changing the meaning of what was written in the KJV, which itself made every effort to not change the meaning found in the original manuscripts.

Simply put, the ESV builds on the strength of the KJV that has gone before it. It doesn’t attempt to reinvent the wheel, but helps give the wheel more strength so it can travel further. Also, the ESV doesn’t change the language for the sake of it, but instead only does so where it is helpful.

Other points to consider

Those responsible for teaching and preaching at the church I attend have chosen to use the ESV. This is a decision that has been made by the leaders of the church. Basically, I trust these guys. If they feel the ESV is the best translation for us to be using as a church, then I believe it is also the best translation of the Bible for teens in our youth ministry.

Those who know me well, know that I tend to go on about how youth ministry needs to be connected with the rest of the church. If young people have an understanding, appreciation and sacrificial love for the church as the bride of Christ, then I’m convinced they’ll be much more likely to stay plugged into a church when they outgrow the youth ministry.

Do you agree? What Bible translation do you use? Leave your thoughts and comments below.