What if it’s true? 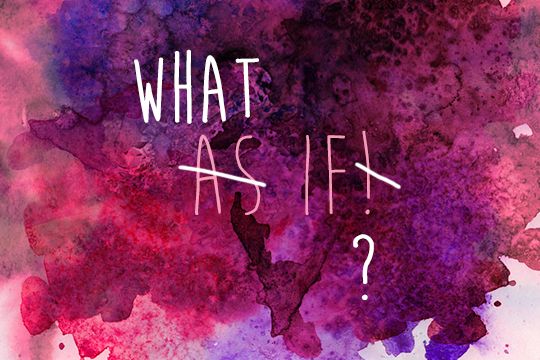 What does it mean for you if the stories of Jesus are real?

The phrase 'AS IF!' is used when there's seemingly no chance of something happening.

Will the popular girl say 'yes' to a date with the nerdy guy? AS IF!

Is Jesus relevant to teenagers in the 21st Century? AS IF!

But maybe we sometimes use 'AS IF!' too quickly...

We ask 'WHAT IF?' when something seems unlikely but it could happen one day!

WHAT IF... the popular girl can actually see past the nerdiness and discovers shared interests with the guy?

WHAT IF... Jesus really was relevant to our world today?

Maybe you've heard about Jesus. You might know some specific bible concepts and parts of Jesus' story. Maybe you're from a religious family that went to church at Christmas and Easter. Maybe you're not. But could Jesus really matter to your everyday life? Some of you will say 'AS IF!' He is from ancient history and has nothing to offer me in this modern, digital world, where I can find solutions to all my problems on Google!

But wait ... WHAT IF? What if Jesus is real? What if this stuff is true? What if Jesus can change my life for eternity? Here's what happened to one guy called Thomas when he asked the 'WHAT IF?' question

In John’s biography of Jesus, one of Jesus’ followers - Thomas - had a big AS IF! moment.

Now Thomas (also known as Didymus), one of the Twelve, was not with the disciples when Jesus came. So the other disciples told him, “We have seen the Lord!” But he said to them, “Unless I see the nail marks in his hands and put my finger where the nails were, and put my hand into his side, I will not believe.” (John 20:24-25)

Jesus is alive again… AS IF! But Thomas would be willing to change to WHAT IF? if he found enough evidence. I reckon if one of your mates had been tragically killed and then some other mates came and told you that he was alive again, you’d likewise find it impossible to believe!

Then Jesus appeared to Thomas

Thomas wanted to see Jesus alive before he’d believe. What did Jesus give him?

A week later his disciples were in the house again, and Thomas was with them. Though the doors were locked, Jesus came and stood among them and said, “Peace be with you!” Then he said to Thomas, “Put your finger here; see my hands. Reach out your hand and put it into my side. Stop doubting and believe.” (John 20:26-27)

Jesus gives Thomas the evidence he needs. Look and touch. See and feel. How does Thomas respond?

Finally, Thomas got it!

It seems that Thomas didn’t even need to touch Jesus. Seeing was enough. What does his response show? He’s recognising that Jesus is LORD and GOD. Jesus is his ruler, master, king, boss and in charge. Thomas went from “AS IF!” to “WHAT IF?” to “NO IFS!” Everything now makes sense for Thomas. He’s actually popped up a number of times throughout John’s biography of Jesus. Each time he doesn’t quite get it. Now that Thomas has seen Jesus alive, he gets it! It’s a little like that moment when the big twist comes in the movie. Up until then you haven’t quite understood the movie. But once the twist comes - the whole movie makes sense! Jesus being alive is that moment for Thomas.

Should we expect Jesus to appear to us?

Then Jesus told him, “Because you have seen me, you have believed; blessed are those who have not seen and yet have believed.” (John 20:29)

The implication? People will believe without having to see. How?

Jesus performed many other signs in the presence of his disciples, which are not recorded in this book. But these are written that you may believe that Jesus is the Messiah, the Son of God, and that by believing you may have life in his name. (John 20:30-31)

We see through the eyewitnesses who were there. Imagine a time before mobile phones with cameras, or a time before any type of cameras existed. If there were to be some sort of fight or brawl on the local oval, how would you find out what happened if you happened to be out of town on that day? You would listen to the eyewitness accounts from your mates.

Jesus being raised from the dead is like that. No-one had the iPhone 5S back then to catch all the details in 120fps video. And yet it’s claimed that over 500 people saw Jesus alive again! If you were out of Jerusalem at the time, you could could have asked lots of people what they saw. Some of those 500 then shared their eyewitness accounts in the New Testament part of the Bible.

What if Jesus really matters?

Perhaps you’ve never seriously considered Jesus before. Or you’ve simply responded with the words “AS IF!” Well ... WHAT IF it is true? Thomas and more than 500 were convinced that Jesus rose from the dead.

WHAT IF you have been wrong in what you think Christianity is all about?

WHAT IF your rebellion against God is so serious that the death of his Son was the only solution? WHAT IF the consequence for rejecting Jesus is eternal death?

WHAT IF the result of believing in Jesus really is eternal life in his name? WHAT IF being friends with Jesus is better than anything you can imagine?

WHAT IF you actually took time to seriously consider Jesus? If the message of Jesus is true, get ready for your life to be changed. Just like Thomas’ life was changed 2000 years ago, Jesus has been changing millions of lives ever since.

Interested in considering Jesus further? Read one of the Jesus Biographies. Consider the significance of Jesus' death. Weigh up the evidence for his resurrection. Learn how to become a Christian.