What does the Bible say about aliens and UFOs? | Bible Daily Devotions for Teens, Christian Youth Articles

What does the Bible say about aliens and UFOs? 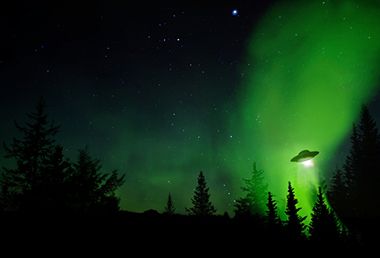 Could God have created living creatures on other planets?

I've been asked in the past 'Do UFOs exist?'

Technically, the answer is 'yes'. But, before we go any further, let me define UFO. A UFO is an Unidentified Flying Object, where “unidentified” simply means the eyewitnesses could not identify what they saw! With today’s advanced technology, it’s no surprise that people sometimes see unidentified objects.

This probably isn’t what people asking the question had in mind though. To most people, a UFO sighting implies visitors from another planet. In the past you would have been labeled crazy for claiming to have seen a UFO, but today it is becoming more acceptable to believe in life on other planets, making the UFO & alien life question important for Christians. I think there are two key points to consider.

1. The Bible doesn't mention life on other planets

Any time the Bible is silent on an issue, I take notice. If God wanted us to know whether life exists elsewhere, He would have revealed it in His Word. His silence on this topic should cause us all to be humble and cautious when forming our opinion. This doesn't mean it's not possible that life exists on other planets, but rather that the focus of the Bible is the story of God’s redemption of humankind. It is not meant to be the source of all knowledge.

Some have interpreted certain passages to give the impression UFOs are indeed mentioned in the Bible. In Exodus, God led the people of Israel via a cloud by day and a pillar of fire by night. Some UFO enthusiasts suggest these were spacecraft! Still others say passages in Ezekiel describing a vision of wheels within a wheel refer to flying saucers.

Proper methods of interpretation do not allow these passages to be interpreted this way.

If there were proof that life exists on other planets it would not harm Christian beliefs. While biblical silence about life beyond Earth may suggest it’s unlikely, this does not rule out with certainty that life exists elsewhere. If it does, we know that this life, too, was created by God, for God is Creator of the entire universe, not just our small corner of it.

Scripture is silent about many created beings we humans have discovered in recent centuries, such as creatures living in the dark depths of the ocean.

Furthermore, angels exist, but they are not usually part of our plane of existence.

What is important is that the possibility of life elsewhere is not inconsistent with the Christian faith for the evidence found in Scripture, even though it would appear unlikely.