The worst gift ever (and the best one too!) | Bible Daily Devotions for Teens, Christian Youth Articles

The worst gift ever (and the best one too!) 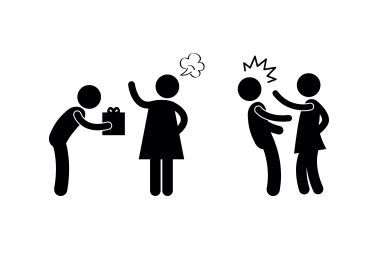 It's true, men are bad gift givers ... except for Jesus.

The Globe and Mail, one of Canada’s national newspapers, ran an article that caught my attention. A woman had written into the paper complaining that after she had asked her husband for a romantic gift, he gave her a bathroom scale so she could check how heavy she was. Ouch.

Readers were then invited to give their answers as to why the husband may have done this and how the woman should respond. One person said the husband may be too busy, so he offered a gift that he thought cut right to the core of the lack of romance in the marriage. Another said that men are stupid when it comes to gifts, so she should just deal with it (my paraphrasing). Another reader said that the husband is clearly an idiot and the woman should leave him. The columnist who leads the column each week said that if women left their husbands every time they received a bad gift, the world would be filled with angry, divorced women stuck holding stupid gifts.

As I read through the comments, I couldn’t help but keep coming back to the same thought. A scale - what was this guy thinking? My wife probably has good reason to give me a scale for Christmas, but if she did, I’d still be offended! I’m far from a perfect husband, but I’d like to think that I know what a good gift is for my wife. I also hope that when the day comes for me to have children, I’ll know what good gifts to give to them.

The hard truth about ourselves

It would be easy to think that Jesus is talking about other people, because no one really thinks they themselves are evil, right? To think this would be missing the point. He could have said, ‘If others, then, though they are evil…’ He didn’t. His words were, ‘If you, then, though you are evil…’

The point that Jesus was making was that compared to God, we are all evil. It may not be the best motivational speech in the world, but it’s the truth. When compared to God, evil people includes murderers, abusers, adulterers, gossipers, liars, the husband who gives his wife a scale for Christmas, and everyone else.

But, when we read these verses, it’s important we don’t miss the obvious. Jesus was with people who were evil. That’s who he was preaching to. In fact, that’s who he came to serve.

The amazing truth about Jesus

Jesus wasn’t interested in comparing people to other people. He was interested in comparing people with a holy God. But Jesus’ statement wasn’t one of despair. If anything, it’s an encouragement! If an evil father is capable of, even on occasion, giving a good gift to his child then how much more is a perfect father capable of giving good gifts to his? The answer is obvious - an infinite amount!

God didn’t leave us to rot in our evil state. By sending his son, Jesus made a way for evil people like you and me to become as pure like Jesus. Jesus’ death on the cross was the punishment that was deserved by evil people like you and me. He took the punishment himself, but the truth of the seriously good news of Jesus doesn’t end there. Just as Jesus’ death carried with it our death, so does his resurrection.