Scientists dress up as Pandas to save Pandas | Bible Daily Devotions for Teens, Christian Youth Articles

Scientists dress up as Pandas to save Pandas 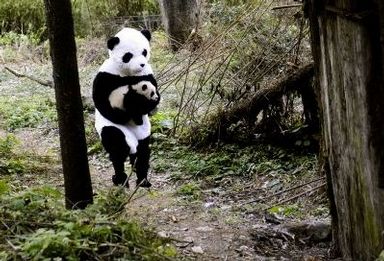 And in other news, God becomes human to save humans....

Researchers in China have taken to dressing up like giant pandas to prevent a captive-bred cub from identifying with humans. You should see the photos. The ruse is vital to its chances of being reintroduced to the wild, they say.

The biologists, from the Hetaoping Research and Conservation Centre in southwestern China’s Sichuan province, hope to avoid previous failed attempts at releasing human-reared pandas into the wild. A 2006 attempt to introduce a male cub Xiang Xiang into the wild ended in tragedy when it was apparently killed by other pandas.

It is amazing what lengths some scientists will go to to save a Panda. To go to all that trouble to dress up in a hot and heavy Panda suit. To lovingly carry baby Pandas and nurture them.

And that’s the miracle of Christmas:

"This is how the birth of Jesus the Messiah came about: His mother Mary was pledged to be married to Joseph, but before they came together, she was found to be pregnant through the Holy Spirit. Because Joseph her husband was faithful to the law, and yet did not want to expose her to public disgrace, he had in mind to divorce her quietly. But after he had considered this, an angel of the Lord appeared to him in a dream and said, “Joseph son of David, do not be afraid to take Mary home as your wife, because what is conceived in her is from the Holy Spirit. She will give birth to a son, and you are to give him the name Jesus, because he will save his people from their sins.”

All this took place to fulfill what the Lord had said through the prophet: “The virgin will conceive and give birth to a son, and they will call him Immanuel” (which means “God with us”). When Joseph woke up, he did what the angel of the Lord had commanded him and took Mary home as his wife. But he did not consummate their marriage until she gave birth to a son. And he gave him the name Jesus." (Matthew 1:18-23)

It is amazing what lengths God went to save us. To go to all that trouble. To lovingly carry our sins.

Know for sure that God cares for you. That God is with us. That Jesus is Immanuel.