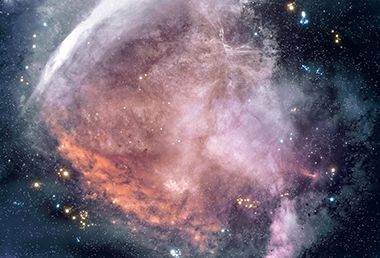 If we can explain the universe using science, why do we need a creator?

Where did we come from?

An argument used by some atheists to show that God doesn't exist, is that science has answered one of the big questions of humanity: How did we get here?

They argue that, as our origins can be explained in purely scientific or ‘natural’ terms, we can be confident that there is no ‘supernatural’ cause. Therefore, they argue we can safely say the supernatural does not exist. In short, science has removed God.

What are we to make of this? It is clearly an important statement to think carefully about. After all, if there is no God, the way that we live and the decisions we make will look very different.

How to show God doesn't exist

Let’s first consider the heart of the atheist's argument. It has two main claims:

If both Claims 1 and 2 are true, then the atheists are right. It would mean that there is no spiritual side to life, there is only the physical universe.

If only Claim 1 is true, then the atheists may still be right, but without scientific proof (Claim 2), they cannot be certain.

Let’s start with Claim 1. It makes some sense to think this way – after all, if we can’t see or touch something, how do we know if it exists or not? If for instance, I told you New Zealand did not exist, that it’s a make-believe place, you could quite easily find out how wrong I am, by going to New Zealand and looking at it for yourself. The problem with Claim 1 though, is that it is talking about things we can not readily see for ourselves.

If for instance, I told you about a place called "Even Newer Zealand", which exists on a planet on the other side of the universe, how would you know if that claim is true? It sounds ridiculous, and probably is … but how can you check it for yourself? It’s beyond the reach of telescopes, and even if you set out on a journey to the other side of the universe, you would die long before you get there.

So the problem with Claim 1 is this: How can you prove it is true? How can you be sure that the physical universe is all that exists? By definition, anything that exists outside of the physical universe cannot be observed. You yourself cannot go and see something outside of the universe (you can't just pop your head out and see if God’s there), because the atoms that make up your body belong to this universe.

The question we start with when thinking about Claim 2 is: How could science, which tries to understand and explain the universe, help us think about what is outside of the physical universe? The answer, of course, is it cannot.

Questions like “Why is the universe here at all?” and “What was before the universe?” are questions that science is unable to answer – because the scientific method requires we observe and experiment, which we cannot do for these questions. So while many believe that Claim 1 is true, they are simply unable to show that it is true, either through science or philosophy.

So let’s go back to the original problem of 'where did we come from?'. An atheist may answer the question something like this:

A. We can explain human origins in terms of natural causes (big bang, life spontaneously starting, evolution into humans etc).

B. If human life came about through these natural causes , then God wasn’t involved.

C. Therefore, there is no God.

Let’s address these claims one by one:

A.  This is not entirely true. First, there is still a bucket load we don’t know about our origins. Much more scientific work needs to be done to understand the origins of the universe, the Earth, and living organisms. There are plenty of questions about the theory of evolution still to be answered. Maybe we will understand more in the future, or maybe science will hit a wall with what it can explain. Secondly, many argue that the universe is a bit too neat and tidy to be purely random chance. The laws of nature work surprising well to enable life to flourish – does that mean there is a Law Giver who wants life to flourish? Maybe.

B. Even if Claim A were true, God may still have been involved. He could very well have been the master-mind of all these 'natural' events, without us being able to see how he did it.

C. Even if we accept Claim B, we are still not any clearer about whether God exists or not. We would simply be unable to say based on the claims of human origins.

Science will never remove God: It is unable to do so. Science does, however, illuminate how wonderful, how marvelous and how beautiful the universe is. Science tells us truckloads about the God who made it happen.

For further reading, John Lennox’s God’s Undertaker: Has Science Buried Religion?. It explores these issues in a lot more depth.