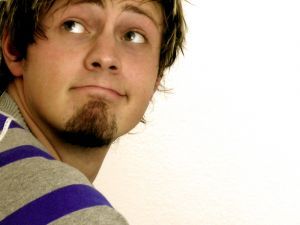 Are you like the man who became Spiderman, Peter Parker: do you do good things to try and outweigh your guilt? Peter Parker was a nerd at school, unpopular with the ladies, not many friends. One day he was bitten by a radioactive spider, and the venom had a crazy effect on him: he took on spider powers! He could climb walls, shoot webs from his hands, jump high and do crazy flips and things like that.

According to the original comic book series, Peter Parker became a famous TV star with his own show – and one day at work, a thief broke into the tv studio. Everyone expected Peter to stop the thief – but instead, Peter refused. The thief got away – but not before something very bad happened. Peter’s Uncle, Ben gets killed. By that thief that Peter could have stopped.

Peter is torn apart by guilt. He could have prevented Uncle Ben’s death. He learns his lesson: with great power comes great responsibility.

He becomes Spiderman, and his guilt drives him on, to fighting crime and beating up bad guys. He’s trying to outdo his guilt with good.

Is that how you deal with guilt?

Hebrews 10 tells us that God sent Jesus to us, to deal with our guilt. Guilt is proof that we have failed God, but Jesus is proof that God is committed to us, and wants to save us.

How does Jesus deal with our guilt? He became our sacrifice. Before Jesus came, Jewish Priests would sacrifice animals – innocent animals to show that God deals with sin by death. Those animals were a foreshadow of Jesus – all he would be and do. God sent Jesus – an innocent, perfect man; God in the flesh – and when he was killed, he suffered God’s punishment on our behalf.

And his death deals with our guilt, finally and permanently.

How do you respond to that? You trust him. You love him. You devote your life to him. You follow him.